Villagers in the Dhading District with Dhan Bahadur on May 19th

On Saturday, 25th April 2015, a severe 7.9-magnitude earthquake hit Nepal and caused thousands of deaths. The situation worsened when aftershocks came in the following days. On May 12 another shaking of 7.3-magnitude hit the country. In the capital city Kathmandu whole parts of the city were devastated, world heritage sites collapsed and the people lost everything within these few days. Most of the people in the capital and surrounding villages live in temporary accommodations. Families were teared apart, one million children are affected. In the countryside the situation is chaotic, accesses are sometimes blocked. Even weeks after the earthquake, help did not arrive in many parts of the country.

Situation of our foster family after the earthquake

We are more than grateful to hear that despite the bad situation in the country the members of our foster family are safe. The parents as well as the oldest daughter were in Kathmandu during the first earthquake. Some personal belongings, among them a laptop, had to be left behind in a collapsing hotel. Mother Rekha was slightly injured. Afterwards the parents spend two nights outdoors in Kathmandu, separated from the rest of the family. Monday after the shaking they could finally catch the bus back to Pokhara. During the second earthquake luckily nobody was harmed. Their home in Pokhara is still intact but the smaller neighboring home where the grandmother, aunt and the eldest son of the family lived became unhabitable.
All family members slept on the floor in the ground floor for weeks after the earthquake, to escape outside quickly in case another shaking hits. Fear and uncertainty remains.

How can we help?

As early as one day after the earthquake we got together and talked how we can help those affected in the best way. As a small association we have no experience so far with disaster relief, so we decided to partner with the Frankfurt Association Nepali Samaj e.V. and consul general of Nepal, Herrn Bodo Krüger to support a campaign of Wings of Help – Luftfahrt ohne Grenzen e.V. (LOG). More information can be found here.

Sustainable Support with our Partner Organization on the ground

We knew from the beginning that we as Sahaya wanted to start own projects on the ground with our partner organization. We needed a bit of time ahead to organize ourselves and to coordinate with our partner in Nepal. He was trying to get a comprehensive view during the first days after the earthquake in the villages. Three weeks after the earthquake he managed to buy tents and food with the donated money and supply three villages in Dhading district in the short-run. The people in these villages lost everything and need desperately medium- and long-term help. More information can be found here, photos from the villages are here. 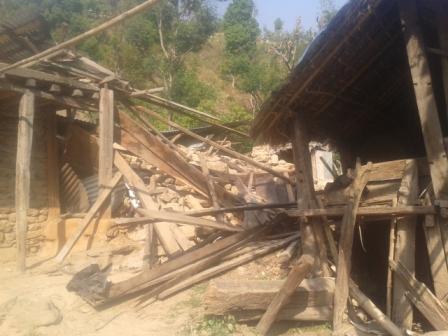 Destroyed buildings in the Dhading District after the devastating earthquakes